This website is the result of collaboration between five people:

If you wish to contact us, please write to: contact@notme.info

The harms of industrial wind turbines (IWT`s) are universal. Residents living close to the IWT`s are complaining similar disadvantages all over the world – irrespective of language, nationality, age or gender.

Industrial wind turbines make a big change for the environment. And they are built right next to people´s houses, hospitals, schools and so on.

One expert after another has stated, that until science knows the side effects IWT`s cause, we have to protect most vulnerable groups: fetuses, children, elderly and people with sicknesses and disabilities.

As mankind, we are as strong as our weakest link.

Wind industry claims, that there are only few people in our communities, who resist IWT`s – let`s show them they are wrong.

We are not NIMBYs, as the wind industry likes to call us. Our backyard is as valuable as anyone`s yard.

We are NOTME people, who think NOT ME, nor anyone else on this planet, should be exposed to harms caused by rotating blades of wind turbines.

By signing this statement you will show, that: 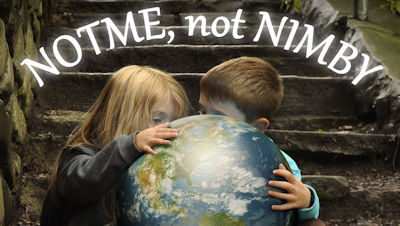